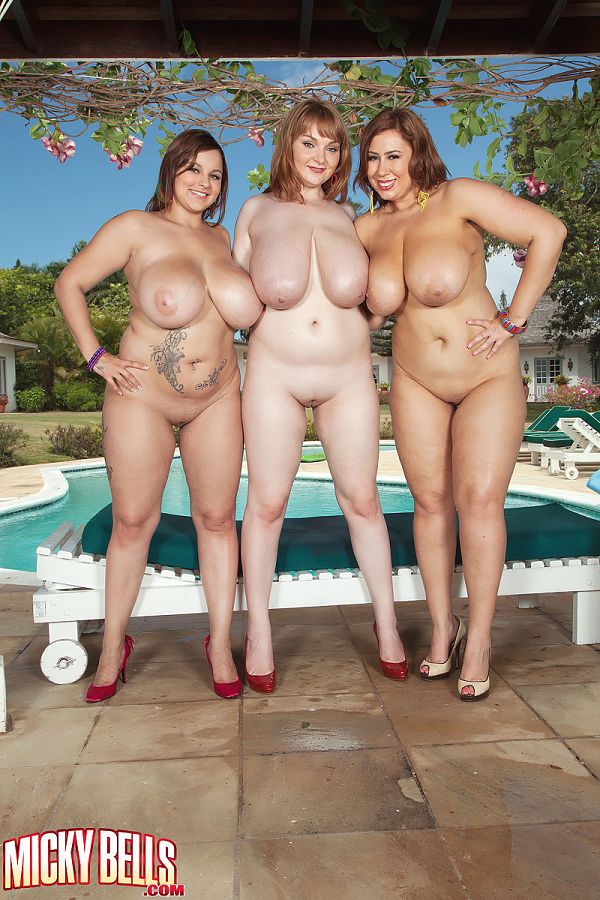 Gya Roberts, Terri Jane and Micky Bells have tits that demand respect. Demand worship. Demand to be photographed and immortalized. Here they are running around a swanky estate in Montego Bay, Jamaica, on the loose and having a blast. With girls like them in your backyard, who would leave the house?

Only The SCORE Group would spend the time and effort and expense to bring this trio together for the first time and possibly the last although we will see what the future may bring. The girls are very frank about their tits when prodded. Gya reflected back to her younger days.

“In the beginning, when I was like in fifth grade, I had the biggest boobs in my class. I was very tall with DD-cup boobs. I was like a giant with big boobs and all the other girls were tiny and had no breasts. All the guys in my school would look at me and say, ‘Whoa!'” Micky recalled, “Well, I started off with no boobs. I looked like a little boy! I think you call that flat? Then suddenly in one year, I was an E-cup. So, in ninth grade, I was already busty. It was a very fast change. It was very hard to get used to having big boobs all of a sudden and being so young!”

And Terri remembered that, “It started when I was 13. I got my first bra then. They grew rapidly after that. I didn’t get teased much. Later, I went from a J to a K. I knew that I was sort of due to move up a cup size because they were growing. So, I went up to a JJ-cup and then all of a sudden, I didn’t fit into my bras anymore. And it was because I had gone up to a K-cup. I got measured and I am a K-cup. I was told that they wouldn’t grow after I turned 22, but I think they will.”