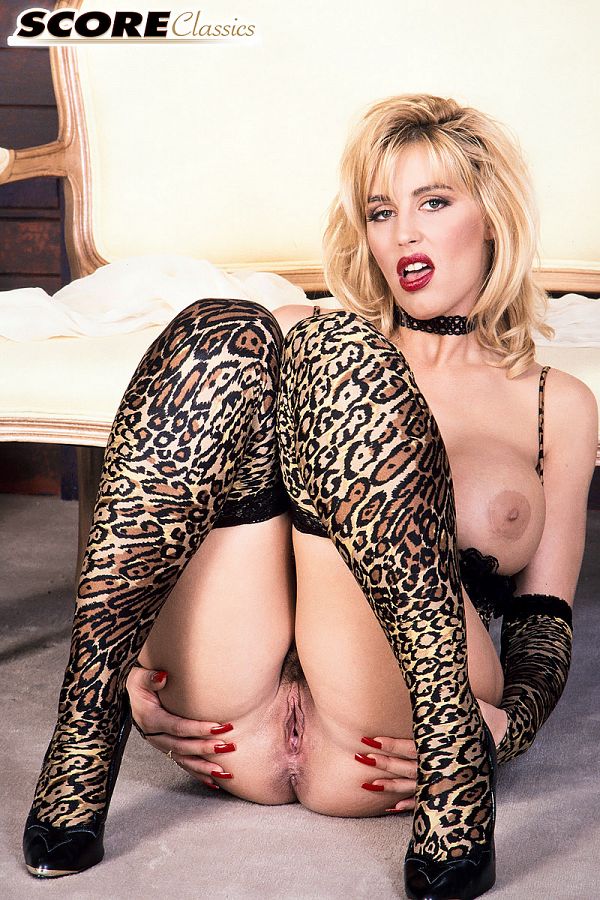 Once upon a time in the 1990s, strip clubs were the place to go, either alone, with your buddies or with people from the office. Packed with busty girls thrusting their breasts and other body parts at their horny customers, the clubs did huge business. To attract more guys to see their shows, the girls, aided by their agents, saw posing in mens’ magazines as the perfect way to get exposure and publicity and attract attention. Many American dancers with big tits, such as Honey Hills, were invited to London to model for SCORE magazine. The tall, slim blonde made her debut in the April 1995 edition.

A Tampa, Florida girl originally from Texas, long-legged Honey spent her free time off-stage horseback riding, spending days at the beach and going to her fitness center. In this pictorial, Honey chose a leopard-pattern outfit. Kitten ears and a tail would have been appropriate accessories.

For every boom, there’s a bust. As the 2000s moved on, the internet began to chip away at the strip clubs around North America. Montreal and Toronto used to be major strip club centers. Today, many famous Canadian and American clubs have disappeared. More and more girls jumped on the web at home instead of taking to professional exotic dancing. The clubs stopped booking feature dancers and relied on house dancers. Political pressure, zoning regulations, inflated property values, customers who would rather stay home and play video games and other factors have all played a role in the decline of the strip clubs in North America.

The pandemic of 2019 has dealt another hammer blow that dancers and the industry have struggled to adapt to.