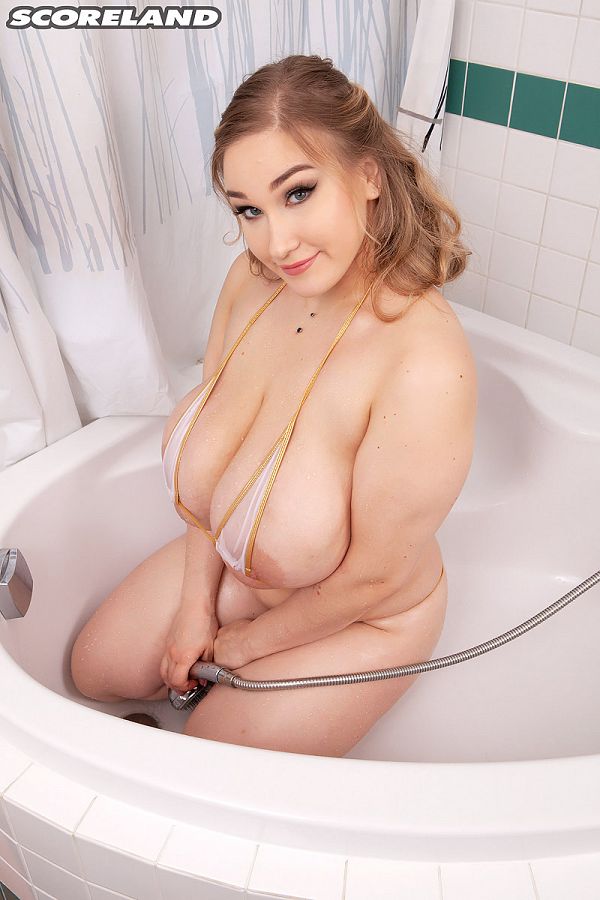 Cheryl Blossom never ceases to amaze. Today, Cheryl has bikinis to try on. Some of them she will wear to a beach or to a pool. Others she would like to wear outside but she’s very hesitant. There have been times when she attracts too much attention. Women have yelled at their boyfriends for looking at her.

Starting in a bra and panties under a short robe, Cheryl does some boob bouncing. Her first choice of bikini is a yellow and white suit. It’s one of her more-modest numbers. Cheryl will wear it in public because it doesn’t reveal too much…at least compared to the other ones she has lined up. She would prefer to wear skimpier ones outside but no one wants a riot of jealous wives and girlfriends that leaves battered husbands and boyfriends all over the beach.

Then comes a one-piece with a floral design. After that conservative suit, Cheryl tries on a string bikini in a color that’s called Barbie Pink. Cheryl loves this bikini. Her next bikini is also a string in a softer pink color.

Taking it off, Cheryl pours oil all over her beautiful, naked self but she’s not finished. Her last bikini is a gold and white suit that becomes translucent over her oil-dripping body. She’d love to wear this one at the beach, too, but knows it would be too much for anyone who sees her wearing it to handle. She doesn’t want anyone to have a medical emergency.